Qvwm is a simple, lightweight window manager, which is built to be similar to Windows 95 interface.  It features a start menu, a task bar, a system tray and windows-like task-switching.

Unlike Windows 95, qvwm’s menus and almost every other feature is controlled by a textual configuration file.  The changes done to it in a session would not be restored unless you write them to the conf file.  But otherwise it provides a nice, simple and light environment for fresh Linuxoids.

The original author of Qvwm, Kenichi Kourai, does no longer maintain it.  I took original version 1.1.12, applied Debian’s patches to version 1.1.12-3 and worked on it.  I fixed some bugs / issues, and added some new stuff.

Here are some screenshots.

A screen with the start menu: 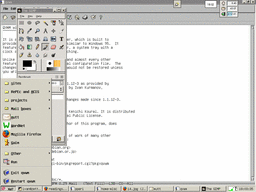 A screen with the task switcher: 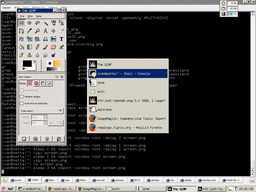 A screen with the deeper levels of the start menu: 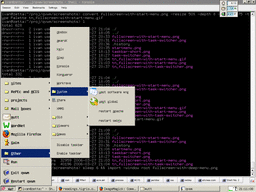 I mainly worked to fix issues, and to remove unnecessary clutter, make things cleaner, lighter.  I removed some stuff which made things look like Windows, but was not functional.  For instance, the picture along the left side of the start menu; I’ve made it optional.

Here are some highlights from list of CHANGES, that I did to qvwm:

Grab the latest package from it’s own directory.

Copyright and great thanks

The copyright of qvwm belongs to Kenichi Kourai. It is distributed under the terms of the GNU General Public License.